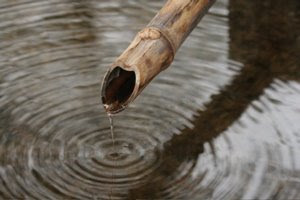 Fountain for cleansing at a small local shrine

Spent the weekend away in Kyoto,the big, elegant gracious city on Hokkaido, a couple of island hops away. It's 2.5 hours by bus, crossing en route over one of the world's biggest suspension bridges.

Mark was part of the Kyoto Foreign Student's music festival, a rather eccentric event to Westerner's eyes. It consisted of foreign students performing dances and songs in national dress, all in the interests of world peace and greater international understanding of course. I found this event slightly disturbing for a number of reasons, but enjoyed the rest of the visit which was my first on this trip to a major Japanese city.

While Mark practised with his Mexican friends I wandered the temples and old alleyways, easily blending in with my Japanese camera gear and propensity to take lots of photographs. I find I'm well camouflaged so long as no one talks to me. People are always asking me for directions. My Japanese is so bad I can't even understand the question let alone answer. Until now my main defence has been to look clueless and make goldfish noises, but I have now mastered "Wakaari masen" (I don't understand.) In Tokushima the response is still bafflement, but people in Kyoto seem to be more used to the idea that someone of Asian appearance might not understand Japanese. Either that or they are more accepting of idiots wandering the streets nodding and smiling.

Anyway, I'll post photos from my weekend with each blog post this week. But more importantly the writing is about to start. I've finished reading my old manuscript and have been amused, surprised, delighted and appalled in turn. It's strange how much of this I don't even remember writing; similarly I have "discovered" bits that I have subsequently "reused" in my plays without realising. I read an essay once which described the artistic process as raking over the same piece of land over and over, turning over the same themes again and again. Maybe that's true with me?

The other thought I had, as I wrote TMMI (too much medical info) in the margin yet again, is that maybe last year I was unconsciously writing as "doctor becoming writer" rather than just writer. There's a lot of self conscious medical detail, as if I want to convince people that I know what I'm talking about - a weird mix of self exploration, medical documentary and pseudo soapie. Guess the next few weeks will tell me whether I've managed to overcome this.
Posted by Piokiwi at 6:37 PM