what they don’t know about snow snow in the morning tastes like sugar
and it’s warm if you snort it.

ducks. ducks hate snow
because it blindfolds the grass.

snow grows giants. you walk over it
and your prints get bigger through the day.

snow doesn’t hide the cracks,
it cushions them.

when snow gets sick, it gets angry
and hard, like ice.

angry snow hurts. it makes
going for a walk scary.

the men in orange jackets take scary snow away.
maybe it goes to prison, maybe they kill it.

the snow that’s left gets old and tired, even the snowmen.
eventually they shrivel up to look just like rocks. And that’s the end of the snow.
Posted by Piokiwi at 11:23 PM 3 comments: 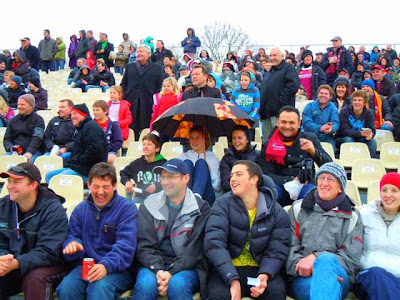 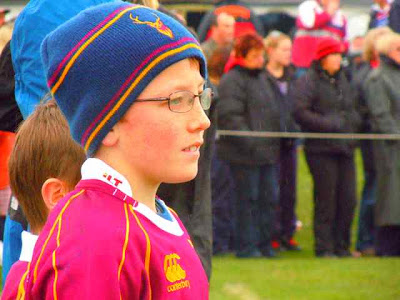 This weekend I had off in Christchurch, so after checking out the excellent Farmer's market in Riccarton we indulged in a spot of compulsory earthquake tourism in Sumner. While driving along looking for cracks and boulders, Mark and I heard on the radio that one of the provincial cup matches was on at Rugby Park, so on a whim we decided to check it out. (I'm writing a play titled The First Asian A*B*, so am experiencing an uncharacteristic interest in rugby).

It turned out to be an excellent match to attend. Rugby Park, in the central suburb of St Albans, is a smallish local ground, called into service now that the AMI stadium is out of action for the forseeable future. It's much smaller, but also much less "commercial" feeling and therefore much closer to the feel of a homeground match in the 1990s, when the opening of the play is set.

The local heroes Canterbury were playing national underdogs Southland for the ITM Cup, and to up the stakes, the Ranfurly Shield was being challenged for. The region's rugby fans were confident ( and much more diehard and ubiquitous than in Auckland, from what I can gather). They had just come out of the Crusaders almost winning the Super 15 and the local Canterbury team winning their recent matches in a very convincing way. Also, as it was a home game the crowd was out in force, decked out in various warm combinations of red and black.

So it was all looking pretty grim for the Southlanders, especially as Canterbury scored two tries while I was still in the queue for tickets (I could tell by the response from over the wall). But then, amazingly, the Southlanders put their heads down and outrun, out defended and out possessed the ball. Their ball handling wasn't was good as Canterbury's, but they made less mistakes and had a great goal kicker and this meant they scored the crucial penalty which won them the match. (By the way, if any of what I am writing sounds wrong it probably is - I'm still pretty junior in terms of rugby watching!)

Anyway, I spent quite a bit of my time paying attention to the crowd around me rather than the action on the field. When the ball neared our end of the field (the tryline for the home team in the second half) people could be heard calling to their favourite players, rather like you'd call for a cat at dinnertime: "Here Robbie! this way!". There were lots of kids in the crowd waving their homemade "TRY!" placards, ditto posh looking old ladies - it seems everyone in Chch comes to the rugby. Particularly rich as soundbite sources were the two grumpy old buggers sitting just to the left and behind us. Throughout the game they could be heard muttering comments like, "what an idiot, can't he pass", "look at that, now the ball's back to where it started," "how did he get that? for goodness' sake." Another man, on the phone to a mate with the teams tied at 19-19 and with 12 minutes to go on the clock: "Never you mind, venison's still on the menu at Rugby Park" (Southland mascot is a deer).
Posted by Piokiwi at 10:58 PM 1 comment: 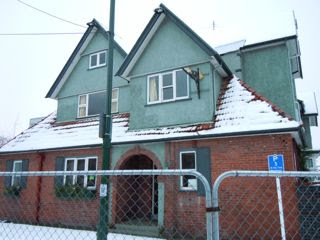 below
in the street
bricks kneel
among tiny lilies
a wrecking machine
crouches
nose upturned
waiting for biscuits.

I'm currently living on the fifth floor of an apartment on Armagh St, Christchurch CBD. From the balcony, one can look out towards the red zone and the rows of wobbly condemned buildings - 'death row'. I'm only here for 6 weeks working, but admit to being a bit of a woose about being on the fifth floor. In my first night here I was shaken awake by an aftershock, but have mellowed so much that three weeks on, I slept peacefully through two aftershocks while my husband was kept awake - or maybe that was just the busy on-call ensuring I passed out successfully at night...

Not surprisingly, it's odd walking around the CBD, staring at the fences everywhere (they migrate frequently along with the wrecking machines, like grazing beasts). The CBD is eerily quiet and almost devoid of people, except on sunny weekends when the local populace comes in with their dogs, strollers and bikes and strolls along the fenceline pointing out the new holes in the cityscape and catching up with the latest earthquake gossip. I've taken to walking different routes to and from work, noticing the changes each day and the small details - rosemary bushes left undisturbed at the periphery of a demolition site, a fur hat perched perkily on top of a letterbox beside a red stickered property, the way the houses crouch at odd angles, almost as if they were people surprised at a party. The few people I do meet smile at me. Are they locals pleased to see that someone is enjoying the city, or are they fellow long term visitors? There are so many new people in town at the moment. On the corner of the Botanic Gardens, the same man in cravat and tails plays "La Vie En Rose" for hours, day after day. It's like groundhog day with a slightly melancholy European air.

There are the stories too. Everyone has them - small anecdotes about what's happened, more poignant than the dramatic news clips and the footage recorded on yet more helicopter flights over the damaged city. I've been recording them in my head, intending to write them down. I feel they need to be remembered, kept before they too are demolished by the passage of time.

I'm delighted to be this week's Tuesday Poetry editor - head on over to the main page to see what I've chosen - three poems, one from each of the shortlisted books for the poetry section of the National Book Awards. Winner will be announced this coming Friday, also the day when the country will explode in a riotous celebration of poetry - hurray!!
Posted by Piokiwi at 5:33 PM 4 comments:

Sir Paul is a physicist, teacher and communicator who has won many scientific accolades for his work in nano-technology and magnetic resonance. His experience and vision allow him to apply great depth of perception to his work in science and entrepreneurialism. He’s also the 2011 New Zealander of the Year, in part for his ability to bridge disciplines, and communicate how we need to work together to move this country forward.

Over the years, Sir Paul has written and broadcast widely, aiming to make science more accessible for all. He advocates the use of the arts to explain and explore science and find the human connection. To paraphrase, the arts helps to seek out that sense of wonder in science - to translate the ‘cold’ mathematical language of science (properties, dimensions) into something which speaks to people (emotions, colours, senses). He’s also spoken on how science is influenced by art and vice versa, observing that scientists ‘borrow’ the words used by the arts to connect with other parts of human creativity. (Unsurprisingly, many scientists – Sir Paul among them – are also artistic).

Sir Paul is also a firm believer in the future of New Zealand, although he says that significant changes need to be made in order to unleash our full potential. His recent address to StrategyNZ: Mapping our Future 2011 makes some very strong points.

His message is simple: NZ has limited natural resources, despite our blind belief in the ‘clean green 100% Pure’ image. We are behind in the world in terms of ‘smart’ industries, those which rely on good ideas cleverly executed rather than our traditional primary industries (farming, tourism) which are resource-heavy with a low relative return. He offers the staggering idea that 100 inspired entrepreneurs could double our present exports - around $4 billion of exports a year is currently earned by the high-tech and creative sector. And how would we do that? The answer is deceptively easy: grow our ‘smart’ industries.

read the rest here.
Posted by Piokiwi at 12:01 PM No comments: