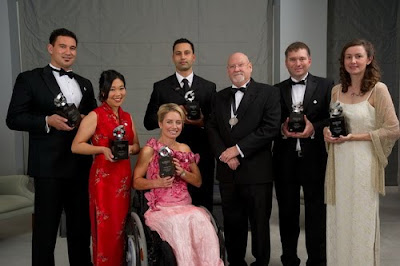 With the other Emerging Leaders and the Blake Medallist, Ray Avery. 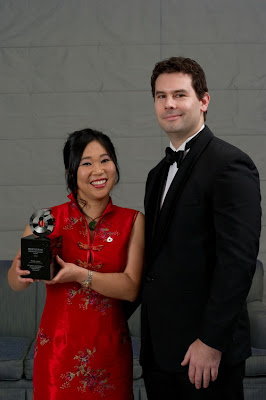 With my personal spy, Mark

A couple of months ago I received a phone call at work from one Sir Ron Carter, one of NZ's iconic leaders. The news he had for me was (he said)very exciting but also top secret - so secret that even the hotel room was booked for me under a different name. But now the secret is out and I can reveal that I am a Sir Peter Blake Emerging Leader for 2010.

This is an important milestone, not only because I get a nice heavy trophy (for a rock it's very pretty) but because it's made me realise that I am being watched. Not in an uh-oh way, a nice way. Both my old school and my old university nominated me for this award. And though I'm still not sure what made them pick me over thousands of other achievers (was it the unusual arts-medicine work? the community involvement? the interesting path I took?), I am very, very grateful that people were looking out for me.

The wait gave me time to adjust my thinking. I was feeling weirded out for a while, and worried that the exposure from the award would affect the way I work. But now I've decided to think of it as a tap on the back. "You've been noticed, now step up and do some work."

There are a number of cool things I'm discovering. First, the award gives me a label. I'm now an "Emerging Leader", as identified by a nationally respected Panel. Though some aspects of that elitism sit about as uncomfortably as the corset I wore under my formal dinner gown, it does mean that people have some way to relate to me. This was illustrated by a "Women in Leadership" cocktail party I attended on Wednesday, in which I felt completely foreign. Nearly every other woman in the room was a CEO or high powered politician. They seemed puzzled that I was there, even though I'd taken off my scarf and had the foresight to put on makeup. But I was tailed around the room by the St Cuths staff (who were acting like proud mother hens) and when they introduced me to these powerful women as a Sir Peter Blake Emerging Leader, the fog cleared and everyone started talking to me. Bingo! The award is like being given the keys to a different part of the house, one I never really thought of exploring before. But it only opens the doors. I still have to walk through.

The second cool thing is that I get to talk. And I do like to talk. Apparently I'll start getting asked to go to schools and organisations to talk about leadership. I'm not exactly an expert(I've never really studied it). But the 'label' will give me the kind of believability that is also a huge responsibility. Yikes. As I said, I do like to talk, especially to kids, and watch them watch me openmouthed that a woman who moves her face so much when she talks could also be a leader... um, right, I'll stop talking now. 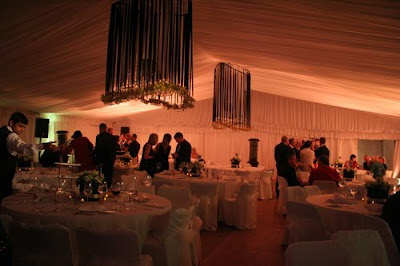