Here's a new blog started for photos/audio files/new poems to come out of the recent Crossed Cultures issue. Enjoy!
Posted by Piokiwi at 12:35 AM 1 comment: 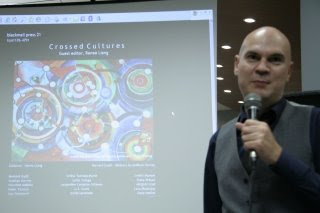 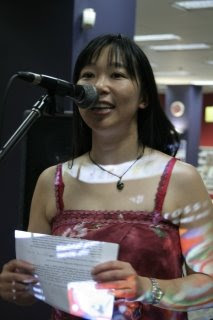 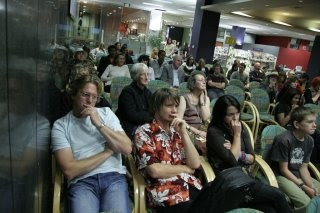 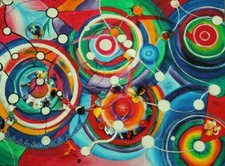 Finally put another of my babies to bed last night.... the Blackmail Press Crossed Cultures issue is now , officially, live. Had the big launch event last night at the Central Library....20 poets in 2.5 hours, it was a big event but went off with only minor hitches... general all round good vibes, wine, nibbles and most of all fine poetry!!
Posted by Piokiwi at 11:15 PM No comments:

Thanks to the wonderful folk at Asia Downunder, who have started loading their stories on Youtube....here's one on me from last year's series.
Posted by Piokiwi at 2:55 PM No comments:

Yay! Asia Downunder is on Utube! it's a story on the wonderful Ishle Yi Park, and played on TV in NZ last month. It features footage of Funky Oriental Beats.
Posted by Piokiwi at 12:16 AM No comments:

I agree absolutely the matter of Asian immigration
Demands serious attention. After all, Mr P Brown, the true definition
Of a true blue Kiwi, like yourself, is, firstly,
A love of the All Blacks. Not in the literal sense
Unless you’re down the Loaded Hog on Friday night,
But I mean, really love the All Blacks, who were robbed
Of their right to the World Cup.

Secondly Mr P Brown, I know you can sing
The national anthem in both English and Maori
After all, true blue Kiwis like yourself, Mr P Brown,
Can. Maori is, of course -
the language of those poor bottom dwelling bastards
soon to be displaced by 'mini societies of Asians'

And we all know the Asians rob people.
It was probably them that robbed the All Blacks.
And now they’ll rob
Those poor brown people of their rightful place to be
At the bottom of New Zealand society.
I feel your pain, I really do, Mr P Brown. I feel it here.
Better, far better, to have a flood of brown people here
than yellow.

With a name like Mr Brown, Mr P Brown, who can blame you
For being a defender of the poor oppressed in our society.
Like Winston Peters, who’s never played the race card, ever.
He’s brown. And you work with other brown people too.
They clean your office toilet, flush your shit down the loo.
An Asian cleaning your loo just wouldn’t be patriotic, would it,
Mr P Brown?

There’s no telling what the Asians would do if they became
Substantial. The greater the number,
The greater the risk.
Sell substandard goods from China?
Our Prime Minister’s only a woman,
She couldn’t tell the difference.
Real quality is Kiwi-made. Macpac packs, Pumpkin Patch.

Those Asians will never integrate.
All they’re interested in are the A’s and
Sending their kids to our best schools.
Their kids won’t ever be Kiwis.
Having them here would only cause
Division, resentment and friction. And not the kind
Of friction you get, Mr P Brown,
By putting your hands down your pants.

Oh and – you can always tell an Asian by the way they look.
They’re yellow, you see. Squinty eyes, and
always in the library. None of them can drive.
And none of them speak
English properly. That brings me to my third point –
All true blue kiwis speak English, don’t they,
Mr P Brown? Even the brown people.
They signed the Treaty in English, after all.

And my last point, the most important. A true blue
Kiwi is born here, Mr P Brown, right here on this soil,
Part of the whenua, they say. So people
Not from this land have no chance
Of integrating into our just, free, and above all,
Tolerant society. No chance at all, Mr P Brown.
I mean, we wouldn’t want a mini-London
On our hands, would we, Mr Brown?

Performed at Poetry Live on April 8th, 2008. In response to anti-Asian immigration comments made by the deputy leader for NZ First, Peter Brown (who is an immigrant from the UK). Among other generally racist comments he also insulted Maori, calling them "bottom of the heap". For a backgrounder to this, refer to the NZ first press release (take a deep breath before you read it), press reaction and other commentary.

It actually takes a lot for me to write an overtly political poem, and since it's an open letter, up it goes. I hope that what it lacks in craft it makes up for in indignation... remember, it's a performance piece :)
Posted by Piokiwi at 6:45 PM 4 comments:

Here's a radio interview on Access Radio that got beamed out last night. I'm being interviewed by Sonia Yee aka The Silkworm Girl, herself a playwright and actress. I talk about my new play Lantern, cultural (im)maturity, the process of writing and various other obsessions. There's a recording of "Banana" in performance, right at the end.