The role of poetry

Kay Ryan has just been named the sixteenth US Poet Laureate. It seems to be a busy job, according to the Time Magazine article, with everything from VIPs asking for personal poetry fixes to requests from schoolkids for sage advice on their assignments. In today's world a salary of $35,000 to have your writing life disrupted for a year doesn't sound like much of a deal.

Still, one of the cool things about being Poet Laureate is that you get to define your take on the role of poetry, and people will listen. And this is what Kay Ryan has to say:
"In a culture like ours, where language has been completely and utterly subordinated to the task of selling people things, how do you create a little freedom? Only in art that isn't designed to sell or convince or sermonize or cajole or urge. Maybe that's poetry, or at least some poetry."

Funnily enough we were talking about that point today, in Winter Warmers, a series of public talks I organise at the Auckland Art Gallery. Today we had Raewyn Alexander, whose poetry muses on the ordinary things and in so doing turns them extraordinary, and Iain Britton, whose poetry muses on the archetypal and iconic, turning everyday events into universal metaphors.

I asked both Raewyn and Iain to comment on the relevance of poetry, given that poetry is not regarded by most NZers as "mainstream" entertainment. In fact many poets I know spend time justifying their love for poetry to non-poet friends (the only people without this problem are those enlightened few who only have poets for friends). As for me, I gave up cajoling my friends a while ago - it wasn't worth the persuasive energy, though those who went tended to say with some surprise they had enjoyed it.

Anyway, back to the main discussion here, which I've labelled at the top so I don't go off on a tangent. Poetry (said Raewyn and Iain), should be more popular than it is. It is one of the oldest (read primal) and most instinctive forms of human expression, since it deals with rhythm, sound and meaning - like chanting, or its related form, music. It is also a "pure" art form - there is no obligation or need to do anything with poetry other than get personal satisfaction from it. Thus, in today's over corporate world, it has low value, unless it can be rejigged for commercial profit.

Which brings me to a discussion I had with some hairdressers on Montana Poetry Day. They were working in a swanky salon on the block of Ponsonby Rd which got chalked with poetry, and came up and asked for some chalk so they could write their own pavement poetry. Pleased, I handed them the piece in my hand, and later photographed them chalking dilligently away. 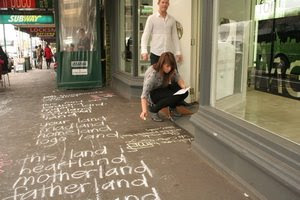 I went for a close-up, only to find an advertisement for their shop on the pavement. Along the lines of:

"Feel like a blowdry? come into our shop for luxury pampering. Style, cut and conditioning for a totally new you."
I said, as nicely and non-confrontationally as I could, that that wasn't a poem, not really. And they told me that they thought it was. Which left me with no answer except for a facial expression somewhere between pain and doubt. Because at the end of the day, where do you draw the line between poetry and advertising? And between good poetry and bad poetry? A lot of poetry has a message; in fact one could argue that poetry with no message is empty poetry. Maybe a message for commercial gain rules it out as poetry? But then having a message for commercial gain doesn't make it bad, or non-poetry. As a little experiment, let's try this rearrangement:

come
into
the shop for

for a
totally
new
you?

Hmmm. Now there's a message, albeit ironic rather than commercial. I rather like it actually.
Posted by Piokiwi at 1:13 AM

This is an interesting discussion you pose here. Let's just say for a moment that advertising and poetry are interchangeable. Wouldn't that by definition make poetry valuable? or would it then make advertising invaluable.

Thanks for posting this... I really like that quote from Ryan. Deleuze put it slightly differently when he talked about minor literature. It is a good question or problem...

In cultures like ours, how do we create a little freedom?

Poetry is one piece of literature that I really don’t know much about.