Tuesday Poem: How I find the time to write

I collect
small droplets of silence
merge them on my tongue
plant small words like daisies
weave them into garlands
offer this to a woman
diving off a cliff
daisies falling before her
a half circle of nail polish
glinting
on her toes
as she turns
to look back.

More poems on Tuesday Poems, click on link at sidebar.
Posted by Piokiwi at 10:47 AM 3 comments:

Tuesday Poem: on the birth of a film

it kicked you awake at night

to where it all started

and now
it has arrived


My sister's film, My Wedding and Other Secrets, had its world premiere on Sunday night, and my whole family was there. It was an emotional night. Not just because it's the end result of over 5 years of hard work, trust and hope by my sister, but also because the film deals with some very personal stories.

The film itself, although fictional, is a love letter from my sister to my parents. The fact that they came to watch the film, with no certainty of its content, is also a gesture of love from them. My mother started crying before the film started (a good sign), and at the end she thanked Cheung Pei Pei, who played the character of the mother in the film, for playing the part with such sympathy. My dad (at his first movie screening for 30 years), left his seat at the end - to rush down the front and take photos of my sister receiving applause. That's a gesture of approval on his part - he's always done this with us to commemorate proud occasions.

As for me, my story is told on screen through the character of Susan, who has to deal with tragedy (you'll have to watch the film to find out). I hasten to add she doesn't make all the same choices I did, but all the same it was a buzz to watch "myself" being played by the very gorgeous Katlyn Wong (I come up to her shoulders when we're both in heels)! I get a couple of seconds of screen time myself as a bitchy waitress (debut speaking line: "yao gei" (soy chicken)). The appearance was so quick my husband missed it. I also appeared in the (real) tapes of us as little kids, which formed part of the opening credits.

All in all, a wonderful, warm night. And yes, there was red carpet and paparazzi. Below, a pic of my proud parents on the red carpet (complete with lion dancers). 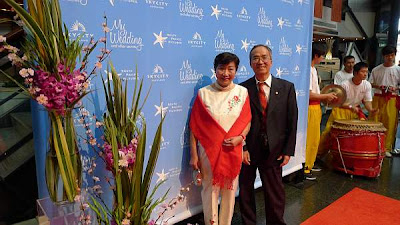 From the place of broken earth
to the place of burning earth
I fly, wings outstretched.
The mountains peer at me
like neighbours through curtains
I am naked. I am unconcerned.
Sunset burns my hands as I land.
You see, I am here to help.
I, by myself.
I have brought nothing but
my burnt hands
and broken mind.

This - rough, unformed - is all I've able to write in response to the earthquake. Pardon its self absorption - I think, in these times, we are all looking inside ourselves, wondering "what if it were me?", "how shall I respond?". There are those who have not paused to think at all, who have not paused at all, who do not pause even now. This little poem is dedicated to them.

On Thursday I flew to Greymouth (well, Hokitika, then by bus to Greymouth) to work in the hospital there for a few days. The tiny plane has not much lap room for computers, and so I read Kapka Kassabova (her book Someone Else's Life is full of poems that seem appropriate to this time - but I haven't asked her permission, so I won't post one). I also scribbled this in my notebook, reading it that night at Frank's cafe where some poets meet every month.
Posted by Piokiwi at 1:26 PM 2 comments: