to our bed moored
in the small
of the back

inside we make our own weather
Posted by Piokiwi at 11:34 PM 1 comment: 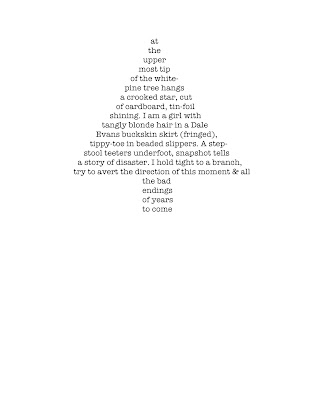 Susan and I are swapping poems as part of the Tuesday Poets "Secret Santa". Susan hails from Portland, Maine - so I'm very excited to be gifting poems across the other side of the world! Her poem is deceptively simple, and paints an innocent picture on the surface. But I love the way the dark and narrow "base" reveals itself to us as we read, jerking us back and then forward in time. You can read more about Susan (she does many more things than just poetry!) on her blog here. Which is also where you can find my poem, posted on her page!
Posted by Piokiwi at 9:59 PM 2 comments:

No more than the earth's reflex
as we, like Maui
climb steadily along the innards
of Hine-Nui-Te-Po
seeking the black richness of her intestines
grinding out her insides
rolling in the dark muck
while some outside
chuckle over their billions
and poor people in China
wait for coal.

But to ask why
and for what
and to where
is for another day.

Today I give you two minutes of my words
to remember all those you have lost.

It was declared that today the nation would observe two minutes of silence to commemorate those lost in the Pike River explosion. I was painting the house when the radio fell silent. It seemed too short for two minutes, and soon after RadioNZ Concert announced "a return to normal programming" which included a moving clarinet concerto and a news item about how the traffic in Napier (Napier?) stopped and you could hear the birdsong. Somehow all this mixed in my head and this is the result. I performed it tonight, on K Rd, under a smooth grey sky and to the rhythm of an electric guitar and some drums.

As a matter of interest, I'm not the only one writing poems about Pike River - this effort has reached $315 on Trademe so far. Just goes to show how people still reach for poetry when it comes to expressing extreme grief or joy.
Posted by Piokiwi at 11:56 PM No comments: