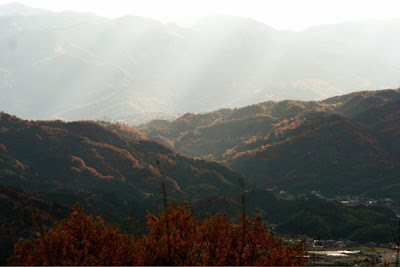 View of hills behind Mt Bizan

I was writing about food this afternoon and it made me hungry, so I took a few steps sideways until I was in the kitchen and started peeling my prize find at the markets on Sunday, bamboo shoots. Though they had looked like small bamboo shoots when I bought them, they peeled more like potatoes and my suspicions were raised. After some sustained googling I realised that they were, in fact, small Japanese taro, or ebiimo. Bamboo shoots are harvested in spring and taro are ready in autumn. Doh!!

Anyway, cooking with local ingredients has been a fascinating part of my day. Usually I try to cook "Japanese style" (as one would in Japan) working out the various combinations of mirin, miso, honey, shoyu and sesame oil; experimentation is a slightly haphazard affair as it is based on
1. Mark's ability to read the label in katakana (he can't read kanji) and
2. me working out what to do with it, using instinct and recipes written for gianjin in English.
It hasn't turned out too badly. For example since I've worked out it was taro I've concocted a rather nice entree for the main meal tonight, which is Thai chicken green curry.

Did I say I try to cook local style? I do, but the other part of the fun is working out how to do "foreign" dishes with only local ingredients. Thai curry isn't too hard since I carted 2kg of curry paste in my luggage at Mark's request; but the other night I cooked a European-style lamb, or what I called European-style - Mark doesn't think there is such a divide between "eastern" and "western" cuisines, but I beg to differ.

Which brings me back, neatly, to the novel. I'm writing a lot about Cantonese-style cooking in my book. My aim is to make the reader salivate as they read, which means that a side effect of me writing is that I eat lots. Or at least I like to blame the writing. Ah. C'est la vie.
Posted by Piokiwi at 4:06 PM