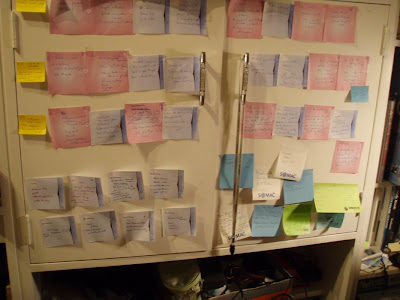 Well, actually there isn't a method. But this is a photo of what my room looks like at the moment: 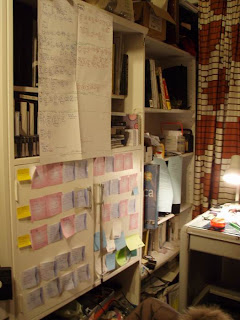 The post-it notes are what I'm using to keep track of my chapters. There are two main characters, thus the pink and blue stickies (and no, it doesn't mean one is a boy and one is a girl). The other post it notes, beneath the main 3-row sequence, are notes on themes, possible plot elements, and reminders for things I need to add.

It's been a steep learning curve trying to figure out how to construct a long narrative, and the curve is still going upwards. I've tried all kinds of things so far, character sheets, synopsies, mindmaps, diagrams, flow charts (that's the one taped above the sticky notes). A lot of the moving around of plot chunks or new plot ideas still happen in my head, usually in the mornings just after I wake up. I have to try and write down my ideas before I lose them.

The current method is borrowed from filmscripting. The post-it notes are a version of "storyboarding" -though as my film director sister has pointed out, a real storyboard would have a sequence of pictures and few words, not a lot of words and no pictures as I do. For me (being a novelist), the words carry the picture. 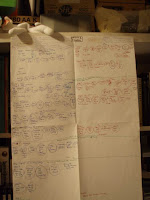