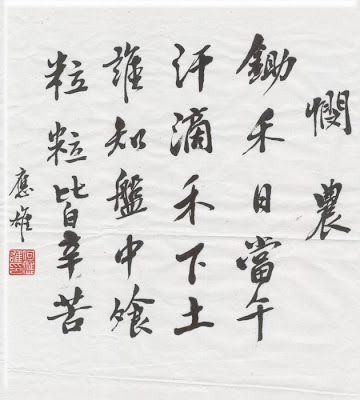 My parents, up until now, have been standing back watching my sudden veer in career direction with what I interpret as baffled bemusement. I'm surprised they are so calm about it, actually. But maybe they are just happy to see me so happy.

But over the last week, both of them have suddenly demonstrated enthusiasm for my newfound vocation. It started, innocently enough, with me requesting my mother to write for me, in Chinese script, the text of a Cantonese saying I'd heard since childhood: "Every grain of rice means hard work". This is one of four Chinese poems or sayings that I am using as a touchstone for my novel.

For those who don't know, I am illiterate in my first spoken language, Chinese. These days, my parents are too fatigued (from years of haranguing me and my sisters) to suggest any more Chinese Lessons, but become instantly delighted and hopeful if we demonstrate any interest whatsoever.

Anyway, I found out through a quick Google that this saying had evolved from an earlier four-line poem attributed to a Chinese Philosopher, Cheng Chan-Pao, and that led me to ask my Dad if he could find the original poem in Chinese. Half an hour later I heard my Dad making a long-distance call to his mate in Hong Kong to ask him for advice. His friend, Uncle Hung, is an ex-Waikato University Professor who just happens to be a descendant of Confucius. "My daughter's writing a book...." my dad started off, proudly. Later Dad called me into his study to show me what he'd found so far. He was surrounded by open Chinese dictionaries and literary texts and looked happy as Larry (whoever Larry is).

A few days later, a fax arrived at his surgery. Uncle Hung had enlisted the help of the Professor of Chinese at Hong Kong University who had trawled his way through the compendium of best Chinese literature ever written (there are lots of volumes and thousands of pages, apparently) and come up with the original of the poem I was looking for. Only it wasn't by Cheng Chan-Pao, it was by Li Shen, a famous Tang Dynasty Poet (772-845 AD).

What had started off as curiosity on my part had become an international scavenger hunt. And I was starting to discover something that mustn't happen only in Chinese literature : the transmission and transmutation of a particularly good line, down through the ages. From poem to philosophy to common saying.

My father suggested I try to translate the original poem myself, now. I was quite surprised by this suggestion, since it must rate as the first time he's acknowledged that I am writing poetry. So I got him to read it to me several times in both Cantonese and Mandarin (they are represented by the same characters, but the pronunciation is very different) and explain the meaning and intent of the characters. Then I tried to match the rhyme scheme, meaning and rhythm of the original as closely as I could. Here it is:

Spade, rice plant, sun at midday,
Sweat drips down on green terrain.
Who knows how a bowl becomes full?
Every grain by hard work gained.

As a final part to this international, intergenerational collaboration, my father has just come home tonight with an envelope almost as big as his smile. Inside were two carefully folded pieces of rice paper, on which were written, in a beautiful hand, the Chinese sayings I'd asked for, plus the poem you see above. They had been transcribed for me by a renowned calligrapher, my father explained. His friend.
Posted by Piokiwi at 9:46 PM

lovely story, so glad your folks are supporting your new career!

There is an interesting angle there - Chinese poetry for the West...chinese Calligraphy is beautiful but has always alluded in meaning for me.

Your next book? haha

Fancy being related to Confucius.

And I thought being related to Iron Chef Kenichi was something to be excited about.