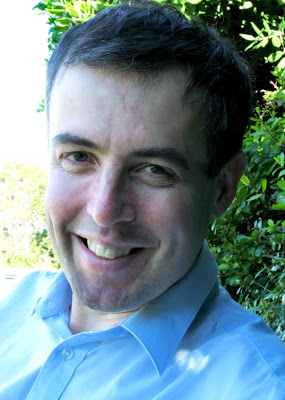 Tim is a friend, fellow poet and one of the most enthusiastic people I know - when I started blogging about poetry many years ago he was one of the first people to welcome me, and it's my pleasure to catch up with him whenever I'm in Wellington. Tim has recently released his third collection of poetry, Men Briefly Explained. Following his 'physical' book tour, Tim has now done a 'virtual' book tour - this blog being his final stop. So without further ado:

Renee: This is the first time I've heard of a "virtual book tour". How is it going and is it succeeding in terms of sales and getting people to read your book?

Tim: Well, I know I sold at least one book yesterday due to a recent blog interview – but I don’t think the sales benefits have been huge. There have been considerable benefits, though, in terms of getting to know the interviewers and their work – and even (fingers crossed) to maybe getting to work on a joint project with one of them. (Got to keep the details under wraps for now, though.)

Renee: For many women writers, finding time to write - in between the demands of family, paying job and housework - is a hot topic. Yet it isn't so much discussed between men - or is it?

Having said that, in my experience, finding the time to write is a perpetual struggle for most writers.

In my case, I’m trying to find a balance between family life, my part-time job, housework (if you saw our house, you would conclude that I don’t give this much attention, yet the vacuuming and washing seems endless), and the environmental campaigns I’m involved in.

Essentially, I try to carve out one day a week for actual writing, and at least another half-day to do writing-related tasks – submitting work, and so forth.

Most of the writers I know have this struggle to balance writing, time and money, and even those who are in financial position to write full-time still have the challenge of the workload required to keep doing that. I do discuss it with my male writer friends, but almost all the writers – and especially, the great majority of the poets – I know are female. I’ve mentioned before Janis Freegard’s research that shows plenty of male poets are publishing collections – see http://janisfreegard.wordpress.com/2011/07/29/poetry-gender-in-new-zealand-publishing-part-2/ - but I don’t know who or where all these male poets are.

Renee: My favourite poem in the collection is The Problem of Descendants. What spurred you to write this poem?

Tim: The collection begins with me – or a character like me – emigrating with his family to New Zealand at age 2, in the poem “Impertinent to Sailors”. While many of the poems in the book are about other men, or about men in general, the poems that are about that character show him ageing, so it makes sense that the final poem in the book is a post-mortem. Plus, at the end of a sequence of increasingly gloomy poems about ageing, I wanted to end on a little bit of a lighter note, as this poem does. The really scary line, at least for a writer, is “file formats are rendered obsolete”.

Renee: You seem a little worried about your own transience - poems like Inheritance, and prose poems like As You Know, Bob. Is this because you've hit 'middle age', or is it because of the wider things that are happening in the world?

Tim:The state of the world worries me a great deal, but there is more of that in my two previous collections (and possibly in my next one as well, gloom fans!) Men Briefly Explained is definitely my “middle aged” collection – I have now entered that golden era in which it’s plausible to start sentences with the words “In my day…”.

Actually, I used to worry a lot more about my own transience when I was a teenager — “Aargh, I’m going to die! To die before I’ve written my masterpiece!” Even though that is probably more true than ever, it bothers me less – but, as I’d started Men Briefly Explained with poems of childhood and youth, it seemed fitting to end it with poems of age.

Renee: Do you think poetry can change thinking and make a difference?

Tim: It can, but I think it would be going too far to claim that it often does, at least in this country, at least recently. For me, New Zealand examples would include the impact of James K. Baxter’s mix of poetry and political/spiritual activism in the late 1960s and early 1970s, and the impact of feminist poets, especially in the 1970s.

In a more extreme environment such as the post-revolutionary Soviet Union, though, poetry had tremendous political impact – it’s no accident that Stalin’s regime killed, imprisoned and generally repressed so many poets.

Tim: It’s taken a while, but at last I can say that it’s going well, and that I’m getting some stories drafted that (at least at the first-draft stage) I’m happy with.

Having been concentrating on poetry – both writing and editing – for the past couple of years, it has taken much mental shifting of gears to get back into short story mode. I think the turning point was actually a short-short I wrote for the first issue of Flash Frontier [http://flash-frontier.com/2012/01/26/january-2012-frontiers-2/], the new New Zealand magazine of flash fiction.

For more on Men Briefly explained and how to get your hands on a copy, click here.
Posted by Piokiwi at 10:34 PM

Thanks so much for posting this, Renee, and for the kind words! You make me sound a bit like Tigger, and that can't be a bad thing...

Thanks so much for this interview, Tim and Renee, and for an introduction to Renee's blog. I look forward to returning.

After reading every stop on your blog book tour, I am impressed by the freshnes of this final entry. A credit to both interviewer and interviewee.

Nice work Renee and Tim. My favourite poem is the last one about the nose. love it...

Nice work Renee and Tim. My favourite poem is the last one about the nose. love it...

Thanks, Rachel, Meliors and Mary - both for these comments, and for your support throughout the tour!

There were more stops than I had expected (or indeed intended), thanks to the generosity of those willing to host me, and so I was especially impressed by the diligence of interviewers such as Renee in coming up with new questions. I have enjoyed myself ... and now plan to return the favour by organising some more interviews on my own blog.