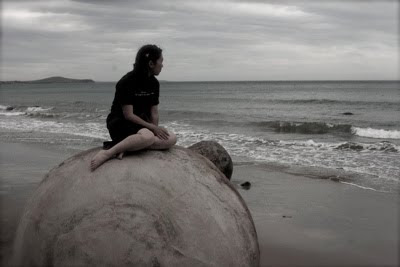 So, it's another year (another decade in fact). This time ten years ago I was with my partner, Casey, and some friends to welcome in the new Millennium. We were confident that Y2K wasn't going to hit, that the world as we knew it would go on and we believed in the lasting power of friendship. That evening we used my trusty old Toyota, Helga, to get to one of the world's most beautiful west-facing beaches, Piha. As the sun went down we fired Roman candles into the sky, made sand-fairies and stayed up playing board games all night. Before dawn we drove to eastern-facing Long Bay to watch the sun rise. It felt raw and new then, the clouds searing apricot-pink on my retina, despite the fact it was just another day.

Fast forward and now Helga is gone and I'm on to my fourth car. The world's future is pretty uncertain. Casey is gone too, leaving me pushing words in his wake. I have found a new love, who is with me now. It feels so good to hold him and feel his solidity, his realness. My friendships remain, so at least I was right about one thing.

I promised that before the start of this next year, I would make a list of things I would prioritise. Not saying yes to every opportunity that comes my way has been one of the hardest skills for me to learn, and it's fair to say that I'm still learning. But this last year has been hectic, too hectic most likely, and I need to slow a little and take time for the important projects. So here they are:

1. My play, The Bone Feeder.
2. My novel, The Colour of Rice.
3. Working as a researcher and writing papers in Growing Up in NZ.
4. Working as a paediatrician.

I think that's enough, although there are a few small writing and organising projects I've already promised people. I hope they will be just that, small and time-limited. That I will have enough discipline to work on the big (and daunting) things, to do them justice. And that at some stage in the next 24 hours I will have a few moments to sit on a beach, listen to the sea, and ponder.
Posted by Piokiwi at 4:26 PM

All the best for the new year, Renee

Renee, how on earth do you find the time to do all those other projects and maintain your medical practice?? Amazing.