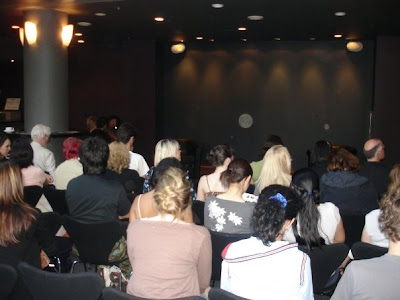 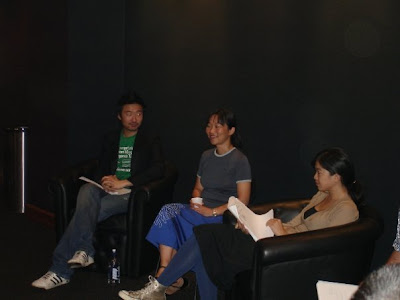 Had the reading of my first long play, "Lantern", last night. I think it's safe to say it was a success - 75 people showed up (catching The Edge staff by surprise - they had to get extra chairs), and the majority stayed for the whole 1 1/2hour reading and then for a further half hour of audience feedback.

One of the things I wasn't prepared for was the huge attack of nerves I had as I neared the Aotea Centre where the reading was to be held. (It helped a little that Andy and Li-Ming, my two wonderful actors, were also feeling slightly sick). I consider myself relatively unflappable when it comes to potential public humiliation. I get a little nervous beforehand, but once I'm up there on the stage I tend to enjoy it. I'm one of the lucky ones I guess.

This time it wasn't me up there on display, but my writing, which somehow seemed even more personal and terrifying. Lantern is not autobiographical, as anyone who has heard the play can attest, but like any writer I inserted a bit of myself into every character and liberally mined the experiences of my friends(some of whom were sitting in the audience!)for a lot of the rest.

So there I was, hiding in the audience as Tony the director, Andy and Li-Ming did an excellent job of the script (it definitely didn't sound like it was only their second full read through, which it was!). I was feeling really wound up, trying to note where the audience responded, where they laughed, where they seemed disinterested, where they held their breaths. I was still tense at interval between the first and second acts even though I was pretty sure the second act, as well as being far shorter, would draw people in if they weren't already.

The feedback session was both uplifting and terrifying. Although I was surprised at some of the audience response (in particular, no one seemed to 'get' initially that the play was actually a universal one about love, overdressed as it was in its cultural cloak), it was really affirming for me as a writer how quickly people attached to the characters and how they started jumping to the defense of their favourite character.

In retrospect, I'm starting to understand how writing theatre is very different to writing, say, a novel. For a start, you're not alone when you create a character: the actor is your helper, they "complete the gesture", as Tony Forster our director told us. (He was quoting someone famous). So instead of long dark nights wrestling with the inner demons of character and how to portray them in a fresh way on the page, you "live" the character, annotate it in some way in your text/stage directions and then work out the rest in collaboration with your actor and director. This is not to say that you don't think deeply about character/motivations/backstory as you would with any narrative; it's just that there's more than one person working on it, so it's a different process.

I think this play is also unusual in that it's so freshly formed that all of it is still up for negotiation. (we were still hacking away at it over our pre-show pies, minutes before the performance!). I don't have an overwhelming attachment to any part or character, which makes it easier to do the pruning and shaping which I'm up to now. I was also lucky to have three very supportive co-collaborators all of whom are artists in their own right: Tony Forster, Li-Ming Hu and Andy Wong. They were conscientious in saying what they liked and didn't like through the workshop process, which helped alleviate my feeling of swimming in the dark a little bit.

Where to next? The response has encouraged me to keep going with "Lantern". I'll be having another development workshop later in the year, and then looking at a small but full production, if all goes well. Yay!!

Thanks to Al Kwun, The Edge publicist extraordinaire, for the photos :)
Posted by Piokiwi at 11:18 PM