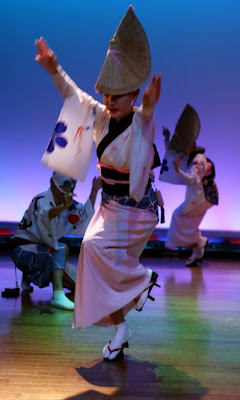 The weekend was spent exploring locally on our bikes, and by bus. We discovered the local meat and fish market, with prices often less than 1/3rd of the supermarket, which made me very happy as it's hard to buy meat here purely because it's so damned expensive. We also went to the regular Sunday farmer's market where Mark usually buys his veges, staggering home with a great load after I insisted on trying all sorts of unusual things, only some of which I know how to cook.

Tokushima is in the middle of the "vegetable bowl" of Japan, and as a result the rest of the country (apparently) envies us for the freshness and cheapness of the local produce. The local "speciality" is a kind of fragrant lime called sudachi, and there's been a big bag of it in our fridge which I've been squeezing and grating my way through. I'm getting quite attached to it actually, and I may post some recipes later.

We also took the cable car to the top of Mt Bizan, more a hill than a mountain, but very cold up top. The Mt Bizan complex also contains several museums and a concert hall where you can watch Awa Odori dancers. Awa Odori is the big city-wide dance party that takes place in August, where for three days the entire population takes to the streets in a simple foot-stomping dance which is meant to resemble (for men) a drunken stumble. It's one of the big festivals of Japan, kind of like Carnivale, only Japanese-style of course.

The show we watched had one of those "audience participation" components at the end. Happily Mark and I were awarded banners for best dancers - not surprising in Mark's case since he took part in the real Awa Odori earlier in the year and was also awarded a banner. In my case, perhaps practising my steps at the dance video game beforehand (Japanese have video games for everything) helped me to win. Hurray!

I was also a good girl, putting in a few hours of writing a day, and getting through chapter 2. Needless to say I've been shuffling back and forth since, rewriting and rejigging, and today I've been moving passages around chapters 1, 2 and 3 whenever doubt and fear strike, which is often. This may explain the excessive degree of displacement activity - writing poetry. I believe I am not the only one who sneak-writes poetry when supposed to be writing something else...
Posted by Piokiwi at 9:41 PM