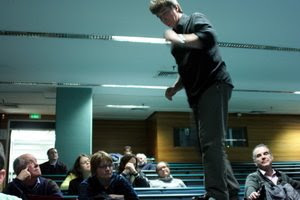 Gordon gets us singing about the Sun Brown King 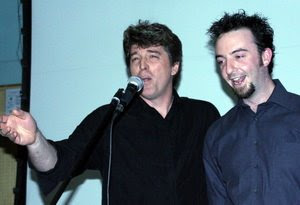 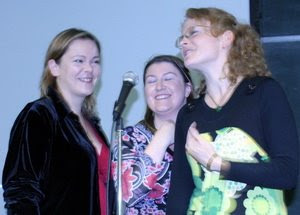 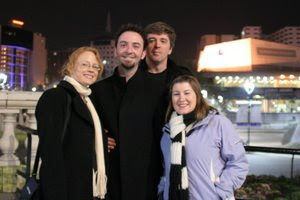 The wonderful ScreamBlueMurmur, a performance poetry group from Belfast, have been tiki touring around the North Island for 3 weeks, and gave their last performance tonight, in a University lecture theatre. They bring a style of performance poetry not seen in Kiwiland much these days - deeply felt, socially conscious poetry, and yes, dare I say it, political. (This is not to say that we don't do socially conscious poetry here. We do - and it is deeply felt - but it just doesn't go as broadly through history and theme as this stuff.)

Although ScreamBlueMurmur also do a lot of weaving in and out with rhythm and narrative, their work is quite unlike that of the Literatti, the only Auckland equivalent. They don't have much recorded background music, but generate it during performance in the form of beats or chants, even getting the audience to join in. Watching them is like participating in some sort of humanistic ritual, and oddly uplifting, even though the subject matter is often dark - discrimination, racism, misunderstanding, war.

The five poets in ScreamBlueMurmur - who put themselves on the line financially to pursue their dream of touring the world with their poetic messages - are all very different in terms of personality, as are their poems. But somehow they manage to blend together (though they tell me that they do have their disagreements while rehearsing)to form a thought-provoking mosaic of images. Poems that I remember in particular are Aisling Doherty's Fairy tales of the Sisters Grimm, and Phatbob's I've Lived Some, as well as the haunting two-hander Mirror Image by Chelley McClear.

ScreamBlueMurmur were hosted by our local Socialist Party (who by their own admission didn't know much about poetry tours, but did know about socialist messages). And much as I abhor the use of poetry for political gain at least these guys delivered on their promise to host the travellers and give them as many performance opportunities as they desired - in schools, in pubs, on maraes, even at small rural community dinners. The visitors also generously invited local poets to perform with them wherever they went, so on their last stop, I was one of the guests, as were Shane Hollands and Miriam Barr. And it was a good gig, even if the lecture theatre seemed ginormous and the lights rather clinical - a good response from the mainly student crowd (my Peter Brown poem is getting quite a lot of outings at the moment,to much reaction).

It's so good to see visitors in little Auckland, from another part of the poetry sphere. (It's not as isolated here as you might think actually). And I haven't even mentioned the work that these guys do in terms of "linking". They started a worldwide poetry event called LovePoetryHateRacism (Auckland was one of over 30 cities to take part this year). And they also go out of their way to make personal connections and offer a reciprocal tour to those poets lucky enough to see their show. Hope to see them again soon!
Posted by Piokiwi at 10:42 PM