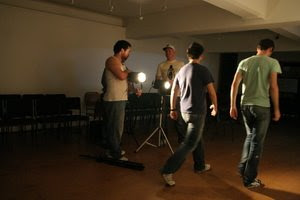 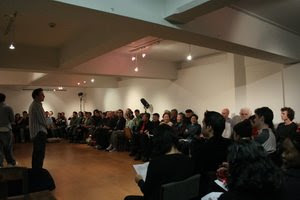 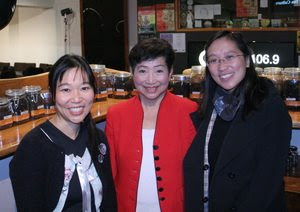 With my mum and my sister, after the show 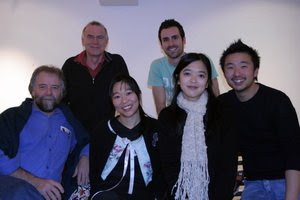 Cast and Crew: Tony, Gary, myself, Peter, Li-Ming and Andy

The two performances of Lantern at Smackbang Theatre have been sold out, with double curtain calls for the actors both nights. Even accounting for an audience largely made up of friends and well-wishers, it's a great result and prompts me to aim for a full season of Lantern - a process which will take many more months, much more money and a lot of work. But I tend to think it's worth it, even if just for the experience of learning to put on a play.

The performances come at the end of three intense weeks of workshops which morphed into rehearsals - a strange situation since normally you don't redraft a play and rehearse for a production at the same time. But then that's just the way it seems to have happened.

In fact, the whole writing process for Lantern has been quite organic. When people ask me how I came to write the play I say it was "accidental". Bullshit, they say. Of course, you don't just accidentally write a 3-act play, but you can follow a series of leads and go by instinct and by the reactions of those who see your words. And it's true that the writing of Lantern was pushed along by various random conversations and apparently unconnected decisions I made, going back two or three years ago, so you could say it's been an "accidental" process, in the same way that you could say some people are "lucky" - in other words, they look out for opportunities and then they take the right ones.

Anyway, back to organic development. It's been neat to work with people like Gary, Tony, Andy and Li-Ming, who often bring a different take or interpretation to my stories. Writing theatre is more of a collaborative process, than an autocratic one -very different to poetry!
Posted by Piokiwi at 12:29 AM