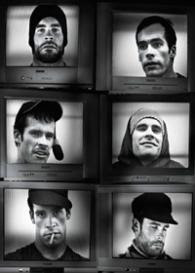 As a writer, I’m intrigued and a little threatened by devised theatre. (What use is a playwright if plays can be made without a script?!) Yes, I’m playing devil’s advocate – I’ve since learnt that writing is actually integral to the process of devising, it’s just that often the writing happens after the story or scene has been found by the actors’ bodies. Following the “if you can’t beat ‘em, join ‘em” philosophy, I recently took part in a couple of devising workshops, which were great fun (if a little painful for those who had to watch me ‘act’).

I met Tim Carlsen and Sophie Roberts at John Bolton’s excellent one-weekend course, run by The Actors Laboratory. By then Tim’s play One Day Moko, which Sophie directs, was well advanced. Tim is a recent Toi Whakaari graduate and met Sophie (also a recent graduate) as she was tutoring the graduate Solo shows. One Day Moko gives the one man show a surprising twist as Tim, embodying a homeless man (and his dog), interacts with other characters via a TV set, which he takes with him on his travels.