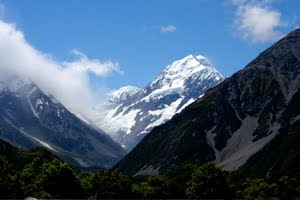 I'm currently working about halfway down the East coast of the South Island. Timaru is one of those places which rates its attractiveness by how close it is to cool places(Hamilton and Palmerston North are others - sorry if any patriots are reading.) But truly, it is quite charming to be in a small town miles from anywhere else. There are certain advantages - but more about that in a future post!

One of the 'nearby' attractions is Mt Cook, NZ's tallest mountain, only 2 1/2 hours away and therefore irresistable... and there's a salmon farm on the way there, too. So that was where I went on Jan 4 which in the warped world of the salaried worker is a stat day off. It's picture-postcard landscape, especially the McKenzie Country (named for a famous cattle rustler/honest drover, depending on which history you read). At this time of year, the road verges are awash in iridescent blue lupins, fluffy sheep and alpacas (yes, alpacas) roam the pastures and the tussock waves golden from the clifftops. Get the picture? That's no match for the blueness of the lakes though - too cold to swim in but that doesn't matter. I swam with my eyes instead.

Despite the utter beauty of the mountains, it turned out to be a day spent thinking about even bigger things - space. There's a planetarium at Mt Cook, useful because the Big Boy is famed for its grumpy weather and there has to be something else for all those camera-toting tourists to do. We arrived while it was blowsy and raining, so we sheltered under the big dome which shows movies about outer space.

Space is amazing. Space is immense. Space is disturbingly wonderful because at a certain stage my brain is turned inside-out from thinking about all the big numbers and apparent contradictions in astrophysics. I mean, when someone is explaining it with plenty of metaphors, I get it, but there's only so much meningeal trampolining that can take place before my mind spits it back out. But I really like the exercise.

Anyway. To the point of this apparently random post. As I was watching these movies, and later that night when we were standing on top of a hill beside Lake Tekapo peering at the universe through telescopes, I started to think about my place in all of this. And what my characters would do if they were confronted by the enormity of space and the smallness of their own existence.

To a certain extent, I work by splitting off parts of myself and animating my own characters (sounds like sci-fi horror I know), so really this was about what I do when confronted by how small my place in the world is. The reaction differs depending on my mood, but it's also driven by my underlying character, which is turn is shaped by my experiences (which I can sometimes influence) and my genetics (which I can't).

Looking at Mt Cook reminded me of a past experience which has influenced me a lot, although I often forget it. My close childhood friend, Lizzy, died while climbing Mt Cook. I was 23 when I heard she'd fallen on the descent from the summit. A few days later I received the postcard she'd sent from Mt Cook village before setting out. And at the funeral her parents passed onto me two things: a gold plated brooch of an ice axe Lizzy had owned and a photograph processed from the camera found with her body. In the photo Liz, sitting on the summit, is watching the sun blush on the white slopes below her. Her face is turned towards the camera and she has an expression of fulfilment.

Liz was an adventurer in the fullest sense of the word. Throughout our childhood and early adulthood she'd astounded me by how she ran at things (sometimes carrying me literally on her back). We must have looked an odd pair, seeing as she was strongly built, good at sport and about a head taller than me. She seemed to have an effortless energy when it came to doing things she wanted to do, not merely dreaming about them. And so, staring at that last picture of hers, I decided to take her as an example and do the same.

I'm proud to say that lot of the big things I've done since then bear her mark. Most of the big backpacker trips, across Europe, Asia and South America, were influenced by the thought of what she would have dared to do. And, even if I didn't literally think "what would Lizzy have done?", probably most of my life changes (such as taking up writing) were probably born out of what by now had become my own habit. So thank you Lizzy, and thanks for showing me how. 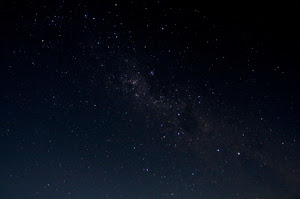 The Milky way, from the top of Mt John, Lake Tekapo
Posted by Piokiwi at 4:59 PM

Hello you! I did not know about your friend Liz, I think, as it was possibly before we even met? I can see how it would leave its mark. She'd probably have been quite proud of you, and as excited and interested in your adventures as your other friends are. ;)

Anyway. Space - yes. Very appealing. I used to get teased for my "dust speck" photos! I like the night sky, because even though it's possible, nay probable that we'll screw it up for ourselves (light pollution and specejunk hellooo!), we'll probably never be able to touch them.