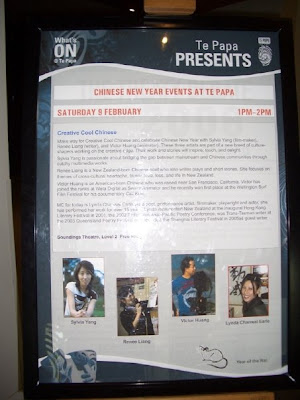 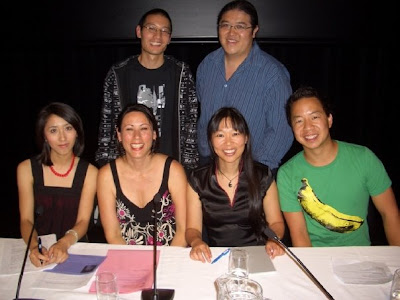 Here's the text of my talk on Saturday at Te Papa. Most of these poems have appeared already on these pages, apologies for the double up but they were an integral part of my presentation.

Yesterday
a shop lady smiled at me
and said,
“Your English is very good”

her eyes crinkled
in a let’s-be-nice-to-aliens way.

I wanted to say

-of course it bloody is,
-I was born here,
-how about you?

But of course I said nothing.
hardly her fault
we Asians all look the same
anyway.

Maybe I should have
I AM KIWI
tattooed on my forehead
except then
I’d be told off by my mother.

pooed in Chinese even.

they knew I wouldn’t touch
I was good then.

We kids built houses
with wooden blocks
painted with Chinese characters.
We fought over
longer characters
on bigger blocks,

My mother used to say,
“No talking English at home!”

I’d brought it home like a disease
from kindy
and infected my sisters.

By the time we were teenagers
my mother was getting tired
from yelling
“No English!”

Once my sister and I decided to start speaking French.
We thought we were being smart.
Even though we weren’t too good at French.

English was my camouflage.
As long as I wore it
talked in English
dreamt in English
ate in English
yes,

even shit in English
I couldn’t be too Chinese

In Hong Kong
I am swept along the pavement
by a torrent of Cantonese
and shop ladies crinkle their eyes
in a let’s-be-nice-to-aliens way.

“Your Chinese is good,”
they say,
“for a foreigner”.

That poem was written out of a frustration to be seen and heard for who I really am.

I’m Renee Wen-Wei Liang, Liang Win Wei, and when my mother is annoyed with me, Mun Wai! I’m a poet, writer, arts facilitator and also (being a good Chinese kid), a doctor.

My parents immigrated to NZ in the 1960s from Hong Kong via China, the Japanese invasion and the Communist takeover.
There’s a story in that somewhere. And if you ask what it is that drives me to be a writer, it is the fact that there are so many stories out there to be told.

I’d like to interrogate that a little bit. I mean, since when have Chinese ever been “cool”, let alone “creative”? I certainly wasn’t. I was the kid who thought sharing around the contents of my highly dubious lunchbox would make me more popular. Who thought that choosing to wear fluorescent white-rimmed coke bottle glasses would make me stand out. (I was right). And who has recently committed the crime of eating half a kilo of prawns, heads included, during a very full plane flight. And then stashed the shells in the seat pocket in front of me.

But amazingly, after years of being on the cultural fringes, Chinese are indeed part of the new creative “cool”. As you have already seen, we’re even defining ‘cool’. There’s Asian styling everywhere, and it’s being designed and made by Chinese. There’s a new wave of interest in Asian writing, from inside and outside of China. Suddenly everyone wants to be like us, to dress like us, talk like us, eat like us. It’s an exciting time to be Chinese right now.

Is it because Chinese are on the rise economically, that we are finally finding a voice, or maybe, that it might now be more acceptable for Chinese kids to enter creative professions? All I can say is that I’m delighted to be standing here today as the epitome of Asian funkiness. And I’d like to share another poem with you.

Daughter,
you should know
never to trust
a gwei lo boy.

Apart from that,
they’re ugly.
All hairy chests
and heavy brows,
I’m not saying they’re cavemen exactly,
but they lack the good genes.

Never trust a gwei lo boy.
after all
they only want you for your money
and your body.

Love? Pah!
Oh he’s charming
to be sure,
but will he be interested
in your culture?
will your children
speak Chinese?

Find a good Chinese boy.
No, he doesn’t have to be a doctor,
though that would be nice,
he just has to be a good Chinese.
Your culture. Remember?

A Chinese boy
will treat you right.
A boy has to know
how to buy you dinner,
open car doors, look after you.
He has to know how to be the man of the house
The one who earns all the money
while you make sure the children are brought up right.
Your culture. Remember?

Don’t get me angry,
All this talk of love.
You girls are all the same,
think you’re so modern
don’t want to listen.

Everyone knows
that gwei lo boys
should not be trusted.

So it’s not easy being Chinese, or rather, Kiwi-Chinese. Although I’ve found it’s much harder to deny my Chinese heritage or to avoid listening to my parents. My culture has become a lot more important to me as I’ve gotten older.

Being Kiwi- Chinese.
It’s part of any emergent “culture” to start by defining itself quite stereotypically. As a writer, I’m seeing the change right now – we’re moving from the old stories, involving legends, ghosts, age-old guilt, and highly improbable martial arts feats, to more contemporary stories exploring what it means to be a Chinese, in our world, today. And as a NZ-born Chinese writer I see my role as contributing to that dialogue. We’re trying to shape a new ‘culture’ here, as Kiwi-Chinese, and like any big endeavour it will involve its share of pain, disagreements, negotiation and compromise. The more voices that take part in that dialogue, the better.

Before I move onto my last poem I’d like to tell you about an event I’m organising in two weekends’ time, in Auckland. It’s called Funky Oriental Beats or FOB for short and it’s the first time we’ve had an all-Asian lineup for a poetry show in Auckland. I think that even being able to assemble 12 accomplished Asian poets, rappers and musicians shows that we now have a “critical mass” of Asian artists and I’m very excited and proud to be part of it. If you’re in Auckland, come along, if not, well I hope this is just the start of many more exciting Kiwi-Chinese arts events.

They call me a banana
A heung-jew
Yellow on the outside,
White on the inside.

So, I’m being compared
to a curvy piece of fruit
grown from a palm
somewhere in Ecuador
a heung-jew,
a fragrant fruit.

I don’t think I’m all that fruity
But I could be wrong.

So
you’re calling me a banana
with my yellow skin
prone to a little freckling
in my riper moments
and slanted eyes,
ching-chong they called me at school
straight black hair
that could never hold a spiral perm
and a propensity for being the teacher’s pet.

I suppose I could call you back
a coconut or gook or honkey
or nigger or wog or curry-eater
but it wouldn’t tell me anything more about you
though it may tell you about me.

Banana is a term
flung by Asians at other Asians,
it’s a reproach,
a squish in the face,
a comment that we have abandoned our culture.

It’s a subtle knife in the back during yum-cha
By my mother’s friends,
Those I have to call “Aunty” and “Uncle”

but it tells you nothing about me.

It may be true
That some of us bananas
hang around in bunches
and discuss our marks,
drink pearl milk tea
complain about our parents
bring disgusting things to eat for lunch,
and the rebels among us
have gwei lo boyfriends

But it still tells you nothing about me.

Peel me
go on
crack my top
and strip me
layer by layer
and underneath
this blubbery skin
is white, yes.

There’s white,
the Kiwi part of me,

but there’s a core
of seed-yellow
all the way though.

Go on. Take a bite.
it may surprise you,
who I am.

having now been in HK a wee bit now, I have been in the continual quest to figure out who I really am...

I've come to the current conclusion that 1st/2nd generation ABC or in your case KBC is a sub generation and culture in its own right.

We are not really Australian or Kiwi but nor are we really Chinese, we pick and choose bits from both cultures which spill into the other.

The more ABCs I meet, the more it seems we all share this same "culture" and mindset...

Its quite fascinating, and a relief to know, its just not me!