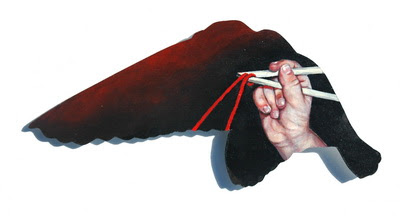 In 1902, the SS Ventnor sank in the Hokianga Harbour with the bones of 499 Chinese miners bound for ancestral graves in Canton. A century later Ben, a young man, arrives in the Far North to try to find some link with his past. A new NZ play which draws on the traditions of Asian storytelling, The Bone Feeder is a sumptuous professional theatre production which uses a cast of 19 performers, live music, high-wire martial arts, dance, drama and comedy to tell this story of one of the first times of contact between NZ Chinese and Maori.

The Bone Feeder is a fictional exploration of what is for many Chinese New Zealanders a very real and significant piece of their history. The story of the SS Ventnor, chartered in 1902 by the Shin Tong Association to carry the exhumed bodies of immigrant Chinese back to their home villages, is one which carries emotional weight for the many NZ Chinese who lost family members in the shipwreck, and for the local Maori families who found bones washed up on the coast.

“Back in the 1900s, it was considered important for Chinese to return to their home villages,” playwright Renee Liang (The First Asian AB, Lantern) explains. “So the Chinese which had migrated to New Zealand to work, mainly in the gold fields, considered themselves only temporary visitors. They always intended to return home once they had made enough money. Of course, life being harsh at that time, many of them didn’t make it."

Those who died were buried in temporary graves, and the then-vast sum of four thousand pounds raised by subscription among the local Chinese community to charter a ship, the SS Ventnor, to carry the exhumed bones home. It was believed that people needed to return to their home villages in order to watch over their descendants and in return, have their graves looked after and spirits nourished.

The Bone Feeder follows the fictional Ben, a young fifth-generation Chinese New Zealander who travels to the present-day Hokianga to look for the bones of his great great grandfather. Driven by his father's dying wish, he encounters some unusual ‘locals’ – who may or may not be cheeky ghosts. It’s also the story of Kwan, a man who emigrates to NZ in the 1800s and has to decide where he belongs.

Liang says, “The story has evolved from a simple hero-quest to a much more layered consideration of what it means to be an immigrant or to inherit an immigrant story. I delve into history and intergenerational relationships, and hopefully make it funny and dramatic along the way. Because it is set in the Hokianga and involves 'ghosts', there's also a fair amount of magic which we use theatrical techniques to bring to life - high-wire flying, live music with traditional Maori and Chinese instruments, light and shadow play, puppetry and dance.”

It is believed to be the first time in NZ that martial arts with high-wire flying have been used for a professional play. Dragon Origin, NZ’s first martial arts stunts company, are providing the technical expertise and muscle power. Stunt choreographer and actor Willie Ying is excited about the show. “It is a chance for us to tell the real Chinese stories, stories that mean something to us.”

Significantly, many of the cast have family history intertwined with the real history explored in The Bone Feeder. Lead actors Gary Young (Apron Strings, Underbelly) and Rob Mokoraka (Strange Resting Places, Tama Tu), have both drawn on their heritage while developing their characters. Young’s family immigrated to NZ during the turbulent post-WWII era, and Mokoraka, who is of Ngapuhi ancestry, spent part of his childhood in the Hokianga. Even director Lauren Jackson (Passage, Exchange) has Chinese ‘ancestry’ – through her young daughter, who is one-eighth Chinese and whose great-great grandmother was one of only six Chinese women living in NZ at the start of the 20th century.

With set design by Jessica Verryt (Young and Hungry Festival 2011, Yours Truly), The Bone Feeder is heavily influenced by both Asian and Western theatre techniques.
Liang’s brief of “creating a magical environment where anything can and does happen” is explored to its fullest potential, with poetic touches and references to Chinese paper cuts and shadow play – with a distinctly NZ feel.

Talented composer Andrew Corrêa leads a group of musicians playing traditional Chinese and Maori instruments, who provide all the sound effects and music for the play. As in Asian theatre, the arrival of the musicians on stage will herald the start of the play.

Liang says that she hopes the story will have universal resonance. “ I can imagine what it’s like to have a foot in two worlds, torn between what is left behind and what is hoped for in the new country. New Zealand is a nation of immigrants – even Maori have their immigration stories. Ultimately it is the people we love – our whanau– that bring us home. And that to me is the most important thing.”

75 mins. Parental guidance recommended for children under 10. In English with phrases in Cantonese and Maori.
Bookings phone (09) 8450295 from 10am – 5pm or online at http://tapac.org.nz