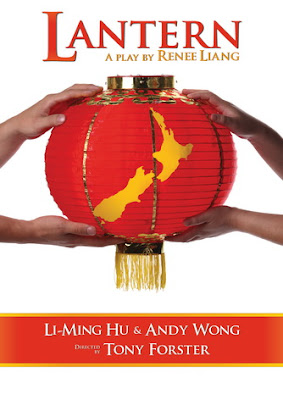 I apologise for my absence from this blog - it's a sad but true irony that the more happening in my life, the less time I have to actually think and write about it. Which is one of the purposes of this blog, really - a rather navel-gazing approach, but let's be honest, I am a bit of a navel-gazer....

Which is why I've named my production company Omphalos Co. or O.Co for short. (My sister suggested O might be thought to stand for other things... so let's debunk that theory right here. O does NOT stand for Orange, Omnibus or Orgasm, OK?)

O. Co is opening its first production in exactly 11 days. Lantern has been about 14 months in the making now. It's become an 85 minute, three act play, and Andy and Li-Ming are furiously rehearsing right now with Tony, the director. It's so nice to work with the same team all the way through - the actors have grown into the characters, or rather vice versa, and I can honestly say that this has been a very collaborative effort. So that's one of the really cool things about this whoel experience.

Of course I am now taking a very different role to that of writer and I can say that swapping hats to the role of producer has been interesting. It hasn't been as bad as I thought, actually (she says heading into the final straight). Like all first timers there are frequent moments of wobbliness, of "oh shit! did I say the right thing? did I make the right decision?" At the end of the day, the responsibility is mine. It's heavy, but not as heavy as it could be.

I have to say that I've been lucky in assembling a team of people who not only know what they are doing, but are very nice about it - to the point of generosity. This is the environment of the theatre community that I've found, and I can't help but feel that this is a magical time in Auckland theatre. We are at just the right stage where there is enough concentration of talent to make really good work, but the scene is not so large as to make people resort to meanness to get an advantage. I may be speaking too soon.. and there are always the cold shoulders and the false assurances... but optimism blended with healthy realism seems to work well at the moment.