Last year, I met a guy called Gareth at a 'creative entrepreneurs' event and swapped cards (as you do at such things - promising to get in touch and then usually forgetting as other things rush in to occupy the mental space). Gareth however followed up with an email the next day, and soon I found myself recording 'Chinglish' (the poem) at his studio.

A few months later a rough track appeared in my inbox, and then notice of meeting about the People In Your Neighbourhood project. I wasn't part of the live stage show, but my track (voice mixed with violin and chinese guzheng)was on the CD, and so I was invited to go along for the ride when the band went to WOMAD. And so it was that this weekend I found myself in a van full of musicians on a 7 hour (that's with LOONG breaks)drive to Taranaki. 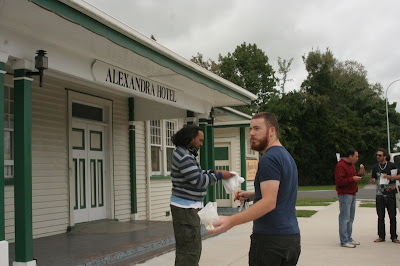 The drive down was fun mainly because, if you are going to spend 7 hours on the road with a bunch of complete strangers, having a professional DJ in the back of the van helps a lot, as does a flamenco guitarist. As does, er, a Navy musician with lots of 'blue' jokes. Around an hour in I got over introducing myself as "hi, I'm track number four" and really started to chill out. 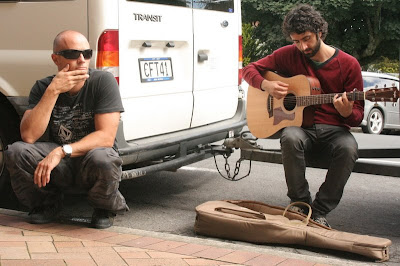 We reached the 'Naki well before dark, checked in at the Devon Hotel, offloaded gears (easy for me - the only instrument I needed was my voice, and even that I didn't need I thought). I met my roommate Maite who's almost the same size as me but whose powerful voice had so impressed me at the Auckland concert the night before. Then it was time to head on down to see WOMAD's opening acts.

WOMAD is an institution in the 'Naki. I went for the first time last year, and remember sitting in the audience soaking up the ambience and plotting how I could come back this year for free or at least for less than the full price. (I'm so Asian). At the time I thought I might be able to wangle a media pass or somesuch. I never dreamed that I could be part of an actual show. So you can imagine the thrill as I hung that little artist pass round my neck, only to have it taken off me ten minutes later - we were short, and someone who actually needed to perform needed it more than me. Never mind. I still got my wrist bracelet, guaranteeing me entry into the smorgasbord that is WOMAD... 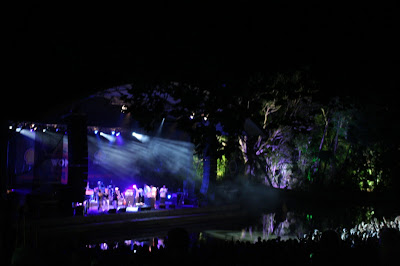 A huge sweeping park. 7 stages, large and small(ish), all with different "feels" because of their setting. Food. Craft stalls. And lots of people who are revelling in the relaxed vibe (or in the case of the teenagers, positively buzzing and hyperactive in that way that only 14 year olds can be). And as the sun goes down the lights come up on the stages and some of the world's best musicians come out to play.

And late, late, after the musicians on stage have finished, it is time to jump on the artist bus back to the hotel for more hanging out with those rare birds, musicians, jamming, singing, flamenco dancing....
Posted by Piokiwi at 10:31 PM

Hey I know Paul and Maite from Flamenco! Small world eh. They are an amazing duo -that voice is to die for. Great to see you last night and so glad you had the opportunity to do something like this!