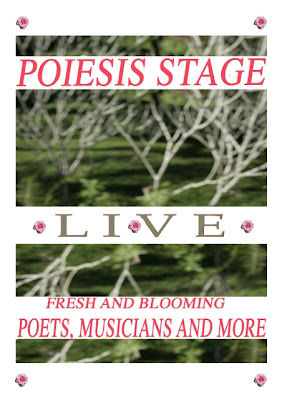 The weekend of Poiesis is nearly upon us. This, after some friendly debate between certain literary watchers who shall remain nameless :), is billed as "the biggest poetry event NZ has yet seen" and happened in the organic way of all good things.

Initially it started with my friend + fellow poet Gus asking if I knew any good poets who would be willing to read for five or so minutes on stage as a "filler" in between bands at a festival. So I quickly assembled a crack team of 10 or so excellent performance poets (not as hard as it seems, since I go to Poetry Live every week).

Somehow the poetry idea grew, with quick buy-in from Auckland City Council - indication of how persuasive Gus can be! Suddenly I found I was in charge of MCing and organising the program for a whole new stage to be devoted to poetry, prose and music at the Parnell Festival of Roses. The festival is billed as a "major event" on the Auckland spring calendar - 20,000 people are expected over the weekend. So being asked to organise 12+ hours of cerebral entertainment over two days as well as some spots on additional stages, was a bit of a surprise. As I got over my initial stunned reaction I found the stage taking over more and more of my time, but it was a lot of fun.

Our stage is to be called Poiesis, as it showcases emerging artists - poetry "coming out" to the public of Auckland, and amazingly we have a prime spot and good gear,that is, pending any disasters.... On the final site visit today we found a large crater dug by the gardeners right in front of where the stage was going to be (mythical leaky pipe, apparently)... but hey, 17 years of medical training isn't worth anything if I can't deal with a small thing like that. And the weather forecast sounds good.
Posted by Piokiwi at 11:22 PM

it was glorious !
absolutely splendid and indescribable by plain words

its very hard to beat the beauty of the roses in the Parnell Gardens at this time of the year … but - you and Anna and the program that you put up, and all the beautiful people that participated and …
- makes me think – maybe we should change the name of the Festival for next year to “Poetry Rose of Parnell Festival” or “Rose of Poetry Parnell Festival” or something …

ton of thankyous
and giga-ton of love !!